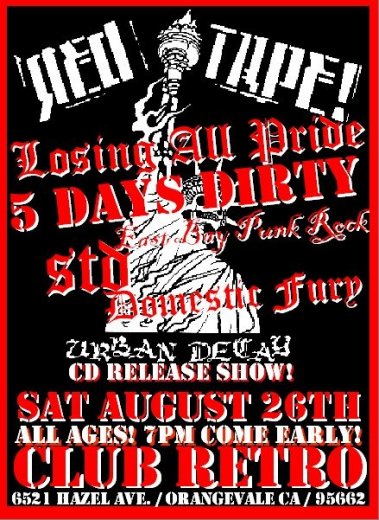 “Urban Decay” and “Cook The Books” are part of a 5-song recording we did in February at Retrofit Recordings. The recording is still being mastered, and the band is still writing new songs… it won’t be long before we’re ready to record the full-lenght! Until then, enjoy the new tunes!

Check the SHOWS page for an update!

Check the SHOWS page because we added some new ones! Heading down to So Cal in Sept & will add some more dates to that trek -so keep checkin!

We still writing & jammin out the new songs -got a few down (“Urban Decay”, “Art Monk”, & “untitled”) and we’re picking up the pace on the rest. Should have some demo tracks to post in the next month or so.

We didn’t forget about the DVD collection… we just keep getting new footage to add! We want include all the RT members over the years + our music videos, so that a lot of coverage to rummage through -thx for being patient on that bitches. 😉

Everyone like a cake fight? Sure you do. Click here for some cake madness and mayhem. We love a cake 😉